LUCIANO SPALLETTI HITS OUT AT VERMAELEN

Roma boss Luciano Spalletti has registered his displeasure at the conduct of new loan signing, Thomas Vermaelen for picking up a red card during the 1-1 draw with FC Porto in the first leg of the 2016/2017 Champions League playoffs. 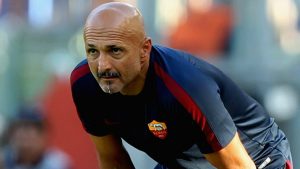 The 30-year-old Belgian international joined the Giallorossi from Spanish giants Barcelona on a full season loan. Unfortunately, Vermaelen spent more time on the treatment table than on the pitch throughout his stay at Camp Nou. He managed a meager return of 11 appearances between 2014 and 2016.

Despite having an advantage of an away goal, Spalletti felt the Italians could have gone home with all three points had Vermaelen applied more discretion.

“An experienced player like Vermaelen should not be getting two cards like he did especially when you look at the first one he got, but physically we saw that we are in good shape and the mistakes we made were only technical so I am satisfied.”

“Personally I’m very happy with the attitude of my team – we were in control of the game when it was 11 against 11. We’ve got to look on the bright side, which is substantial. We started with a good personality and I’m glad also to have seen the other side of my team, which showed resistance under pressure right to the end.”

“The only criticism I can have of my team is that they should have dealt with certain situations better. We needed a bit more maturity rather than trying quick breaks which just saw us lose our balance in the process,” he added.

Roma welcomes Porto to the Stadio Olimpico next week. The goal is to hold out a goaless draw or simply beat the Portuguese club. Achieving that will see them become the second Italian club to scale through the play offs. Only AC Milan have managed to cross that hurdle while Napoli and Udinese came short.